I’m always excited to read a decision that splits hairs–finding some claims in a patent valid and others invalid.  My hope is that the explanation will really get to the crux of the issues and help me to better understand how the law works. I’m often disappointed, but the Federal Circuit’s newest decision in Weisner v. Google LLC, — F.4th — (Fed. Cir. 2022) does offer some good clues.  The basic outcome here: Weisner’s claims directed toward collecting information are abstract ideas; those directed toward using the information are patent eligible.  This outcome is consistent with what we are seeing in biotech as well: diagnostics get a thumbs down; therapeutics get a thumbs up.

Weisner sued Google for patent infringement back in 2020, asserting infringement of a family of four patents. U.S. Patent Nos. 10,380,202, 10,642,910, 10,394,905 and 10,642,911.  But, Google won the case fairly quickly on a R.12(b)(6) motion to dismiss with a holding from the district court that the asserted claims are ineligible under 35 U.S.C. § 101 (abstract ideas).  On appeal, a divided Federal Circuit has reversed-in-part, holding that some of the claims are patent eligible because they implement “a specific solution to a problem rooted in computer technology.”  Alice Step 2.

Judge Stoll wrote the majority opinion joined by Judge Reyna. Judge Hughes dissented, arguing that all the claims are invalid.

Weisner’s four patents are all part of the same family and all relate to ways of recording a person’s physical location history in ways that correspond to certain transactions. In the image (Fig.3 above), you can see the dude interacting with a Macy’s story device. Dude’s phone is configured to record the transaction along with the location history and push it to the cloud.  Dude is doing something similar at Benson’s (Fig.4 below), but in that one he is entering the transaction details manually since Benson’s is a Brooklyn institution and isn’t high-tech like Macy’s. 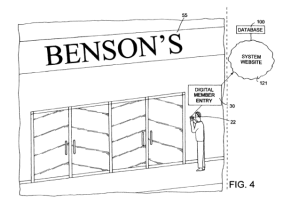 The Federal Circuit divided the claims into two categories:

In the appeal, the Federal Circuit agreed that all of the claims fail Alice step 1. In particular, the court found that they were all directed to the unpatentable idea of “collecting information on a user’s movements and location history and electronically recording that data.”  Essentially, this is an electronic travel log that is effectively the same as what humans have been doing for all of history.  As the district court wrote: “Humans have consistently kept records of a person’s location and travel in the form of travel logs, diaries, journals, and calendars, which compile information such as time and location.” Weisner v. Google LLC, 551 F. Supp. 3d 334 (S.D.N.Y. 2021).  Weisner argued that the claims were limited to keeping travel history of members only — a feature that improves data integrity.  On appeal though, the Federal Circuit rejected this claim as “attorney argument, unlinked to the complaint or the patent claims or specifications.”  Even though eligibility is a question of law, it must still be based upon something more than simply attorney argument.

At step 2, the court also agreed that Claim Set A was not salvageable because the recited innovations are all merely generically claimed components.

But, Claim Set B is different. First, because Set B adds the search results uses, the Federal Circuit found it to be a “much closer question” as to whether they are directed to an abstract idea.  In the end though the court concluded that the claims are directed to an abstract idea at Alice Step 1.  I note here that the appellate court did not use any real analysis to decide this issue other than seemingly judgely  argument.  Perhaps the court should have checked the prior portion of this very opinion where it discounted mere attorney argument on the same topic.

At Alice Step 2, the court concluded that the claims recite a specific implementation that – at least at this stage – should have survived a motion to dismiss because they “plausibly capture an inventive concept.  Here, the court notes that the inventive concept comes from tying searches to a third party “reference individual” whose location history is similar to the party doing an internet search. “The system then prioritizes search results that the reference individual has visited.”  In its decision, the Federal Circuit explained that this linkage is more than simply “improving web search using location history.” Rather, it is a specific implementation of that concept.

Judge Hughes wrote in dissent that the claimed search improvements are just like any old search with the addition of new searchable data — location history.  The Stoll majority responds in a footnote that Judge Hughes opinion “misses the point” by discounting the importance of prioritizing travel histories in the search.  As I mentioned in the intro, this outcome fits a standard approach that we are seeing in eligibility cases — it is much easier to protect methods of using information than it is to protect methods of collecting information.  In the use-case, the information itself combined with some use will regularly be seen as an inventive concept.  On the other hand, the courts have been less willing to say that collecting information is patent eligible.

The patents here are co-owned by the inventors, Sholem Weisner and Schmuel Nemanov.   Weisner wanted to sue Google, but Nemanov refused.   Weisner went ahead and sued Google and also joined Namanov as an involuntary party under FRCP 19(a).  See, AsymmetRx, Inv. v. Biocare Med., 582 F.3d 1314, 1322 (Fed. Cir. 2009)(“A patentee that does not voluntarily join an action prosecuted by its exclusive licensee can be joined as a defendant….”).   The agreement between the two parties is a bit interesting. Weisner owns 78% of the rights, and the parties agreed that he would control exploitation of the patent “and will not be undercut by a minority owner.” WeisnerNemanovAgreement. The two battled these issues in a parallel lawsuit in NY State Court. WEISNER, SHOLEM vs. NEMANOV, SHMUEL, Docket No. 502269/2020 (N.Y. Sup Ct. Jan 29, 2020).

What Advisors Need To Know About Tax-Loss Harvesting

The HACK Cybersecurity ETF in Focus