The two appellate opinions are also parallel.  In both cases Judge Hughes concluded that claims were ineligible as directed to abstract ideas.  Likewise, in both cases Judge Stoll concluded that the patentees had alleged plausible and specific facts showing that the claims embodied inventive concepts. As such Judge Stoll concluded that dismissal on the pleadings–before weighing any evidence–was improper.  But, the two cases have different outcomes because of the third panel member, Judge Reyna.  In IBM, Judge Reyna joined Judge Hughes’ opinion siding with the defendant.  In Weisner, Judge Reyna joined Judge Stoll’s opinion siding with the patentee.

To be clear all three judges agreed that most of the asserted claims were invalid.  The disagreement is over a subset that, according to Judge Stoll at least, the patentees made plausible and specific allegations sufficient to overcome a motion to dismiss.

Federal litigation begins with a plaintiff filing a complaint. In patent litigation, this is typically the patentee suing a defendant for patent infringement.  Under the rules, the complaint must include a “short and plain statement … showing” that the patentee is entitled to relief.  FRCP R. 8. In Iqbal and Twombly, the Supreme Court reinterpreted this rule to require nonconclusory allegations of specific facts that make the cause-of-action plausible.  If the complaint fails this standard, the defendant can seek what was traditionally known as a “demurrer” and is now called a “motion to dismiss for failure to state a claim upon which relief can be granted” under R. 12(b)(6) or “motion on the pleadings” under R. 12(c).

At the pleading stage, the court generally does not require the parties to provide admissible evidence to prove their factual contentions.  But, one trick with patent eligibility is that eligibility is a question of law rather than a question of fact and the courts can require parties to prove-up questions of law very early-on in the lawsuit.  This is especially true in the context of patent eligibility where, for the most part, the proof is intrinsic evidence such as the patent document itself and perhaps the prosecution history file.  But, eligibility can at times also require consideration of extrinsic evidence, such as whether aspects of the claimed invention were, in-fact, already generic concepts to a person of skill in the art.

Such functional claim language, without more, is insufficient for patentability under our law.

Slip Op. At Alice Step-2, the majority inquired as to any specific inventive concept beyond the abstract idea itself (and found none).   Here, the court again focused on the functional limitations that it found to be insufficient: “simply not enough under step two.”

In partial dissent, Judge Stoll looked particularly to claims 9 and 13 that focused on rearrangement of the layers and particularly required “rearranging logic” and “re-matching logic.”  Judge Stoll then read the IBM complaint which explained how the problem of rearrangement of an overly cluttered display is not a simple task — especially once you begin dealing with a large number of objects.  Although expert testimony is not normally needed at the motion-to-dismiss stage, eligibility is different and district courts are regularly allowing expert declarations.  In this case, IBM actually attached its expert declaration to the amended complaint itself in order to preempt the eligibility challenge.  The expert testimony explained the difficulty of rearranging and re-matching data in a way that is comprehensible on a display.  The layers coupled with dynamic re-layering as claimed help solve this problem, according to the expert.

In her decision, Judge Stoll read IBM’s specific allegations as supported by their expert declaration and found them to make a plausible claim of a technical improvement sufficient satisfy Alice Step 2.  As such, Stoll would have reversed as to those claims, as she did in Weisner.

The second patent at issue is IBM’s US9158789 which claims a method of “coordinated geospatial” mapping.   The basic idea is that a user draws a particular area on a map, and then is given filtered results specific to their particular selection.  The figure above comes from IBM’s patent and shows how the user can draw a boundary (the triangle).  The list is then populated with relevant results from inside the boundary.  I used this with Zillow (the accused infringer) when looking for a house to buy in a specific area of Columbia Missouri.  A screenshot of my neighborhood below (no houses for sale though). 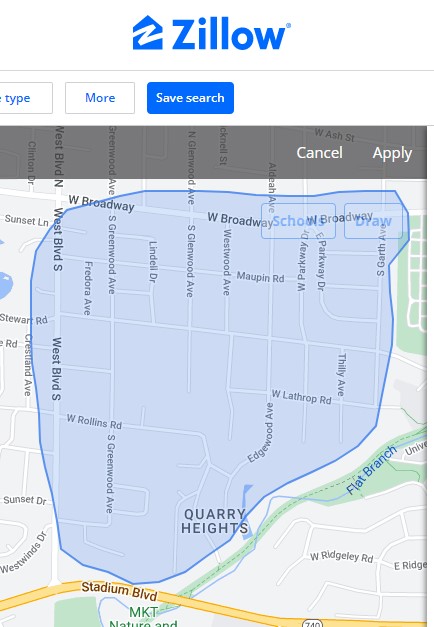 Judge Hughes explains that the IBM claims are directed to the abstract idea of :

Responding to a user’s selection of a portion of a displayed map by simultaneously updating the map and a co-displayed list of items on the map.

Slip Op.  In making this Step-1 determination, the appellate court significantly overlapped the Step-2 analysis–holding that the claims are “result-oriented” rather than directed to technical improvements. Once it dis reaching Step-2, the court found that the claims contained no inventive concept: The invention “was not directed to a computer-specific problem and merely used well-understood, routine, or conventional technology (a general-purpose computer) to more quickly solve the problem of layering and displaying visual data.”  The court also read through the claim steps and found them to be functionally claimed–a loser under Step-1 and Step-2.

It is not clear why Judge Reyna sided with the patentee in Weisner but with the accused infringer in IBM.  My best stab at distinguishing the two holdings is as follows. From these two cases, we might divide the claims into three categories:

Reading between Judge Reyna’s sub silento lines, methods of use that go beyond mere display represent the type of invention that is more likely to pass muster.

5 Tax Strategies for a Bonus or Windfall

Timothy B. Dyk: The Education of a Federal Judge

The Latest In Financial #AdvisorTech (December 2022)