Andrew Davis is an ophthalmologist in Bellevue.  In his spare time he invents canine communication devices and treat dispensers.  Figure 9 below comes from his US9723813 (2012 priority date).

You can buy something similar from Amazon – the Furbo dog camera. 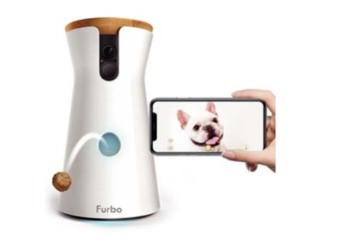 DoggyPhone has sued Tomofun (maker of Furbo) for patent infringement. DoggyPhone LLC v. Tomofun, LLC., 19-cv-1901 (W.D. Wa. 2022).  Tomofun petitioned for inter partes review (IPR) on five separate grounds.  However, the PTAB denied institution, after finding that the asserted prior art failed to teach all of the claimed elements in the proper combination. (IPR2021-00260 DoggyPhone).  The district court had stayed litigation pending outcome of the IPR.  Now though the case is up and running again with jury trial set for January 2023.

The district court just issued claim construction, refusing to find any of the claim terms indefinite and giving all terms their ‘plain and ordinary meaning.’

7. A system for communicating with a pet, comprising:

a food dispenser that dispenses treats from the treat bin;

a control that transmits to the delivery module a treat delivery command,

Decisions by the Court as an Institution; or by the Judge as a Human?

Order on “In re unsealing of court records” withdrawn

Order on "In re unsealing of court records" withdrawn

Who Pays for What in a Wedding?