Results of a water sample taken Aug. 31 as part of weekly testing at Bare Hill Pond show that cyanobacteria has doubled since the Aug. 24 test, keeping the Board of Health’s no-swimming advisory for people and pets in place for yet another week. Algal blooms at the levels found in the pond have the potential to turn toxic, and visibility in the water is less than 4 feet, making the swimming ban a necessity according to standards set by the Massachusetts Department of Health.

Whether the water is actually toxic to people and pets can be determined only by a cyanotoxin test, and according to Board of Health Chair Libby Levison, there will most likely be two of those tests this season. One was on Aug. 28 and showed negligible levels of toxin. The final test will take place when the water clears, she said.

Levison explained that even if the water starts to look clearer and visibility improves, it doesn’t mean the danger has passed. Some cyanobacterial blooms, as they die off, release additional toxins, making the water even more hazardous.

Weekly testing for cyanobacteria (often referred to as blue-green algae) began in August with an unconcerning result for the first water sample, but subsequent tests showed cyanobacteria exceeding acceptable state standards—the point at which blooms have the potential to quickly turn toxic. The latest test, from a water sample taken Aug. 31, is the highest yet at 371,000 cyanobacterial cells per milliliter, up from 174,000 cells/mL a week earlier. State standards set 70,000 cells/mL as the point where algal blooms can become harmful and local boards of health must issue advisories.

Although the current advisory directs people to wash boats before driving away with their boat trailers, the water has been shut off at the town beach due to contamination at one of the town’s two Pond Road wells. This week and last, a bucket of brown water with a long-handled brush stood near the dry water tap, a setup that met with disapproval from Nashoba Associated Boards of Health sanitarian Ira Grossman, who has asked Harvard’s water commissioners to turn the water back on if boaters and crew teams were going to be allowed in the water.  “It’s not appropriate to pass along weeds and cyanobacteria to other ponds,” he said. 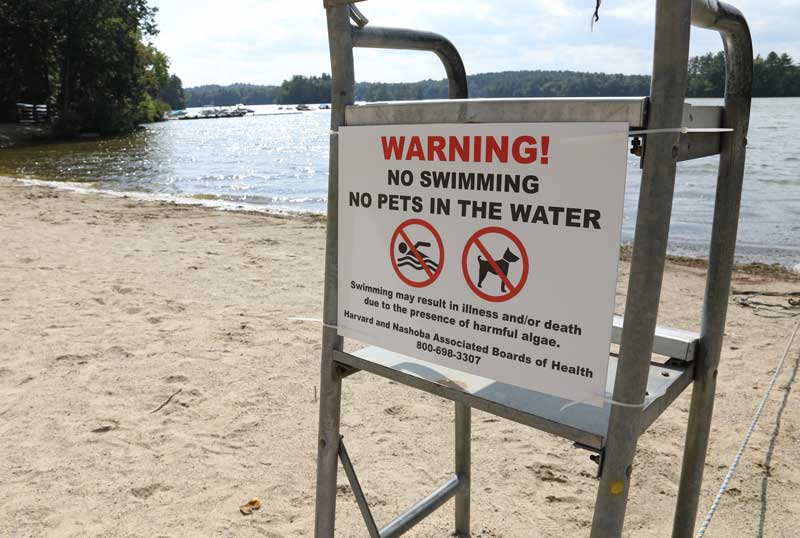 Because of cyanobacteria, the town beach is closed to swimmers on a sunny, hot afternoon, Sept. 8. (Photo by Lisa Aciukewicz)