Canons and Canards: Recreating Prior Art

In its petition for en banc rehearing Innovation Sciences raises some great old cases.  En banc petition from Innovation Scis., LLC v. Amazon.com, Inc., 842 Fed. Appx. 555 (Fed. Cir. 2021)(unpublished).  In particular, the petition argues that the Federal Circuit’s decision in the case is contrary to both:

Both of these cases relate to the type of evidence available to invalidate issued patents.

In The Barbed Wire Cases, the patent challengers had introduced oral testimony from 24 eye-witnesses who each testified that they saw a prior art fence on display a county fair in 1858, and including at least one person of skill in the art (a blacksmith).  But, the Supreme Court found the evidence lacking. The court noted the “unsatisfactory character” of oral testimony “arising from the forgetfulness of witnesses, their liability to mistakes, their proneness to recollect things” in a biased way.

The very fact, which courts as well as the public have not failed to recognize, that almost every important patent, from the cotton gin of Whitney to the one under consideration, has been attacked by the testimony of witnesses who imagined they had made similar discoveries long before the patentee had claimed to have invented his device, has tended to throw a certain amount of discredit upon all that class of evidence, and to demand that it be subjected to the closest scrutiny. Thus, the Court showed serious distaste for all oral testimony proffered to invalidate a patent–regardless of the interest of the witnesses.

[T]here is not a single written record, letter, or specification of prior date to Eibel’s application that discloses any such discovery by any one, or the use of the pitch of the wire to aid the speed of the mechine. The oral evidence on this point falls far short of being enough to overcome the presumption of novelty from the granting of the patent. The temptation to remember in such cases and the ease with which honest witnesses can convince themselves after many years of having had a conception at the basis of a valuable patent, are well known in this branch of law, and have properly led to a rule that evidence to prove prior discovery must be clear and satisfactory. 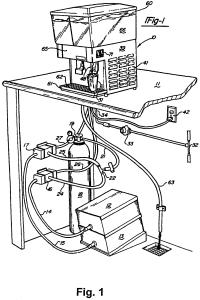 The beverage dispenser case, Juicy Whip, follows along this same line, but also focuses on the use of non-prior art as evidence.  In particular, the accused infringer had “recreated” what it claimed was a prior art beverage dispenser and provided oral testimony.  The appellate court rejected the demonstration as “no more reliable than any of the other oral testimony.”  Id.  A patent cannot be invalidated based upon “oral testimony accompanied by an admittedly non-anticipatory visual aid.” Id.  Juicy Whip was decided by the typical pro-patentee Judge Linn and joined by Judge Lourie.  Judge Mayer wrote in dissent that the oral testimony coupled with the model should be sufficient.

The new petition relating to these issues is Innovation Scis., LLC v. Amazon.com, Inc., 842 Fed. Appx. 555 (Fed. Cir. 2021)(unpublished).  The case involves some sort of wireless communications technology useful in home automation.  The closest prior art was a home automation software called HAL2000 created by Tim Shriver back in the early 2000s.  But, the patents don’t just cover software.  Rather, they are directed to various software-hardware combinations and methods of use of those combinations.

In order to show the use of HAL2000 met all the limitations, Amazon had Shriver implement the old code on some old hardware.  Then, Amazon’s expert witness tested the new creation that we might call HAL2019 to show that the prior art met all the claim limitations.  After hearing those results, the jury sided with the defense and found the claims invalid as anticipated. On appeal, the Federal Circuit affirmed. Although it was a non-precedential opinion, the court was somewhat careful to explain that the recreation was appropriate in this case because “substantial evidence supports a finding that the HAL system on which Dr. Johnson based his opinion was representative of prior-art HAL systems.” Innovation Scis. 842 Fed. Appx. 555.

The petition explains the hardware and configuration for prior art HAL systems  were each uniquely installed by customers and that the particular recreated HAL system was designed in 2019 using the asserted claims as a roadmap rather than actually recreating something known to exist.  And, according to petitioner, this recreated system “was the only prior art relied upon at trial.” (with one minor exception). Although nobody testified that the 2019 system as created actually existed before the critical date, folks did testify that the 2019 system “could have” existed. Based upon these recitations of the evidence, the petition then asks two questions:

I see the issues here as fabulously interesting and important. The practical problem for the petitioner though stems from the law that appears willing to allow recreations of the prior art so long as sufficient documentary evidence supports a conclusion that the recreation is representative of the prior art. And, in this case, the challenger provided a variety of evidence to prove that point, including product manuals, articles, and even a video of the system being demonstrated on Oprah. Despite citing these great cases, in the end, the Plaintiff is really arguing that those bits of evidence are insufficient. And, re-arguing the facts is almost always a losing proposition for rehearing.

Chief Judge Moore authored the Federal Circuit opinion joined by Judges Prost and Hughes.  Donald Jackson and his team at Davidson Berquist represented the patentee at trial, on appeal, and in this petition for rehearing.  Amazon relied on David Hadden and his team from Fenwick throughout the case.  The Federal Circuit’s appellate procedure bars any opposing response unless requested by the court.

How to Pay Off Your Student Loans

How to Increase Your Client Base as a Financial Advisor

How to Create Buyer Personas as a Financial Advisor

Kitces & Carl Ep 102: Reflecting On The Journey Of Building A Career And Business