My personal name is fairly unique. But, there are several of us, including the most  Dennis Crouch, the world’s most famous folk music double bassist. The photo below shows Dennis Crouch performing alongside Allison Kraus and Robert Plant. It is rare, but sometimes folks get confused about who-is-who, but we quickly figure it out.  And, in our world of easy data-tracking, some folks prefer having common names to help avoid undue detection.  There is no central naming authority and so any attempt to ensure unique names would likely fail.

RFID chips are little electronic identification tags and, like names, RFID chips work best when given a unique serial number.  For commercial products, a common approach is to have a three-part ID number that identifies the brand, the class of goods, and the particular product.  The hardware does not have any anti-authoritarian bias, but it is still a tricky process to ensure uniqueness – especially in a distributed global system.

Adasa’s U.S. Pat. No. 9,798,967 facilitates unique RFID serial numbers, allowing them to be created on-demand and without additional authorizations or queries to some central authority. The basic solution here: some RFID authority allocates a block of serial numbers to the RFID creator who then gives each RFID being created a unique serial number taken from the block.

In 2017, Adasa sued Avery Dennison for patent infringement. At the close of discovery, both sides made several summary judgment arguments:

Thus, at the summary judgment (pre-trial), the district court completely sided with the patentee as to claim 1, finding it infringed and not invalid.  All that was left for claim 1 was a trial on damages.  At that point, other claims were still pending, but the patentee successfully requested that those claims be dismissed without prejudice so that the case could efficiently move forward.  At trial, the jury returned a verdict of 0.45 cents per chip — which added up to $35 million.   The district court also added a $20 million sanction against the defendant for discovery abuse. (AD had failed to disclose more than two-billion RFID chips it had sold until a post-trial audit revealed their existence). 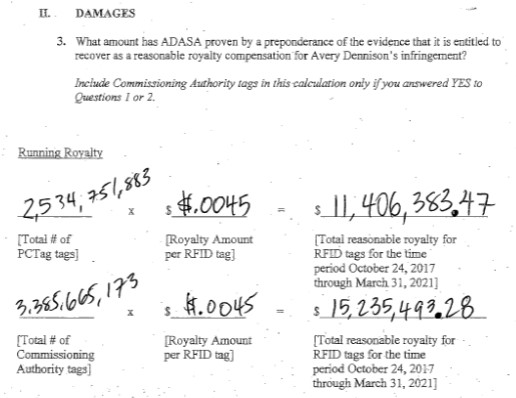 As I was reading this case, I was sure that the Federal Circuit was going to flip the whole table based upon eligibility.  But no, the Federal Circuit affirmed the district court’s conclusion that the claims are directed to a “hardware-based RFID serial number data structure designed to enable technological improvements to the commissioning process.”  It certainly helped the patentee here that Chief Judge Moore was on the panel, but Judge Hughes and Stark also signed-on to the opinion.

Patentee did not fare as well on anticipation/obviousness. Defendant had relied upon “RFID for DUMMIES” as the key prior art.  That reference included a description of how ID allocation worked when the central server was unavailable. And, the court concluded that a reasonable juror “could find RFID for Dummies discloses each element of claim 1.”

RFID for Dummies describes a methodology for ensuring the assignment of unique serial numbers to RFID tags when a central numbering authority is inaccessible or impractical, for example, when a company utilizes multiple manufacturing lines to produce the same product. To decentralize and make feasible the allocation of unique serial numbers across all manufacturing lines, RFID for Dummies discloses an “intelligent hierarchy” in which “a range of serial numbers for each product is allocated to each manufacturing facility.” “Within a facility, a range of numbers from those allocated to the facility is allocated to each line” thereby effectively subdividing the serial number “into a facility number, line number, and subserial number in which the allocation hierarchy is maintained between facility number and line number.”

According to the court, this description could be read to be the same thing that is claimed. In other words, this is an issue for the jury.  Although the focus was on anticipation, the Federal Circuit here also vacated the single reference summary judgment of non-obviousness.  (The court also concluded that a second reference also could reasonably be seen as anticipatory and that summary judgment had been inappropriate).

On remand, the court will likely hold a new trial on anticipation/obviousness. If the claims are still valid then the damages verdict should stand.

The defendant on appeal argued that the judge should have asked the jury for a lump-sum payment rather than only a per-piece royalty amount.  But, during trial the defendant never advanced a lump-sum damages theory.

It may be that in some circumstances licenses, standing alone without supporting lay or expert testimony, can support a lump-sum instruction. This is not such a case. Here, Avery Dennison clearly and repeatedly argued against the relevancy of the [lump sum] licenses upon which it now relies. Its damages expert opined at least two of the three licenses were not helpful to understanding the value of a hypothetical negotiation. . . . Avery Dennison instead focused its damages theory at trial on design-around costs, which it presented to the jury as a starting-point in a hypothetical negotiation for a running royalty, not a lump-sum payment.

Sanctions: After trial had completed, Avery Dennison disclosed that it had sold more than 2-billion additional RFID tags.  The district court at that point sanctioned the company an additional .2 cents per infringing tag. The district court additionally noted Avery Dennison’s bad behavior throughout the litigation process: “patent and continuous disregard for the seriousness of this litigation and its expected obligations.” On appeal, the Federal Circuit found no general problem with awarding sanctions or the process involved.

However, the Federal Circuit did find fault with the district court’s sanction calculation. In particular, the district court sanctioned the defendant 0.2 cents for every infringing tag. It should have imposed the penalty only on the 2 billion that were disclosed late in the process. That would have totaled out to ~ $5 million  sanction instead of ~ $20 million.

On remand, the district court can re-institute the sanctions.  The appellate panel recognized that a new validity trial will be ongoing, but noted that the sanctions award can persist even if the defendant ultimately wins the new trial.

What It Is and How It Works

Resetting Work/Life Balance By Getting Paid For Expertise

Resetting Work/Life Balance By Getting Paid For Expertise

California v. Texas: Which is Better for Business? [313]

A Mathematical Model of a Rake

Encourage Clients To Take Action By Asking Their Future Self

What Is GDP and Why Is It So Important to Economists and Investors?