Trade Dress Product Design: Power of the Presumption of Validity

The SoClean’s eponymous product cleans CPAP machine parts. Sunset was a former distributor for SoClean, but has now become a competitor.  The SoClean device has a compact filter that should be replaced every six-months–creating a nice subscription market. Sunset sells a generic version of the same filter. Litigation ensued.

SoClean’s problem back in 2018 was how to protect these filters with intellectual property.  The company had waited too long to file for patent protection and so it turned to trademark.  The USPTO complied and issued registered two trademarks on the filter shape.  The two (shown below) are almost identical except for some dashed lines. 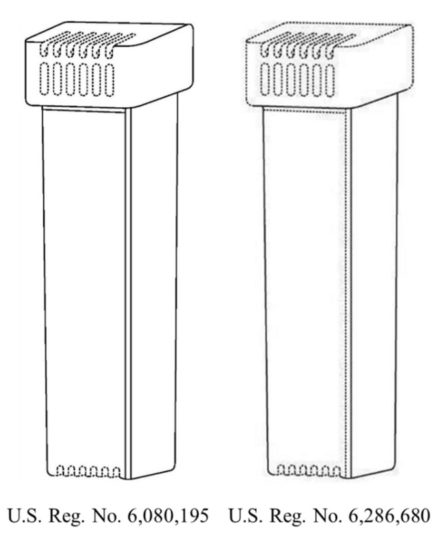 With the trademark registration in-hand, the district court partially granted SoClean’s motion for preliminary injunction.  However, instead of barring Sunset from selling its competing products, it prohibited Sunset marketing or advertising its filter in any bare form.  Rather, the defendant must “prominently display the Sunset brand name in a manner that leaves no reasonable confusion that what is being sold
is a Sunset brand filter.” District Court Opinion.   The case is still pending at the district court (involving other products and claims), but an order granting a preliminary injunction is automatically appealable.  And, because the complaint includes patent infringement claims, the appeal was directed to the Federal Circuit.

On appeal, the Federal Circuit affirmed, but only after reviewing some interesting arguments from Sunset.

Secondary Meaning: Trade dress is only protectable upon showing of secondary meaning.  Here, however, Federal Registration serves as prima facie evidence of validity. 15 U.S.C. § 1057(b).  Sunset pointed to mistakes made by the trademark examiner, but the appellate court found those complaints legally insufficient.  In particular, the court concluded that the statutory presumption of validity implicitly forbids simply reviewing and reconsidering the work already done by the TM examiner.

[S]crutinizing the application process and deciding whether the trademark examiner was correct to issue the registration in the first place is the opposite of presuming that the registration as issued is valid.

Slip Op.  Sunset can undermine secondary meaning, but it must do so by providing evidence rather than simply poking holes in the prosecution process.

Important note here.  I mentioned errors by the trademark examiner.  They are actually quite significant.  I read looked through the USPTO file jacket and was unable to see any evidence presented of secondary meaning except for a self-serving statement from SoClean’s VP of IP that the product was distinctive and had been used for at least five years in a manner that was “substantially exclusive and continuous.”  In general, that amount of evidence is insufficient to support a product design trade dress registration.

In order to protect trade dress, the courts apply a “vigorous evidentiary requirement” to ensure that the mark has obtained secondary meaning.  Because the burdens had shifted upon registration, the district court wrote that Sunset now had the “vigorous” requirement.  On appeal, the Federal Circuit rejected the “vigorousness” portion of the district court’s opinion, but fount that a harmless error.  Sunset’s burden is simply to provide a preponderance of the evidence showing that the mark lacks secondary meaning.  But here, presented evidence that was “equivocal, at best.”

Equivocal evidence plainly fails to satisfy a preponderance-of-the-evidence standard, so Sunset is wrong to suggest that the district court would have reached a different result had it applied the correct standard. The district court’s misstatement of the applicable standard of  roof is harmless error.

Functionality: You likely considered the filter above and thought – this seems like the purview of patents rather than trademarks. Here, Sunset argues that the trade dress design “is entirely utilitarian” and therefore not protectable as trade dress.  The district court concluded that the filter head design includes “some arbitrary elements” — enough so that the presumption of validity applies here.

Irreparable Harm: The Trademark Modernization Act of 2020 states that a TM plaintiff seeking any injunction “shall be entitled to a rebuttable presumption of irreparable harm.” 15 U.S.C. § 1116.  Sunset did not attempt to rebut that presumption in this case.

How to Close the Conversation Gap With Your Clients

The Latest In Financial #AdvisorTech (September 2022)

How Much Does Birth Control Cost?